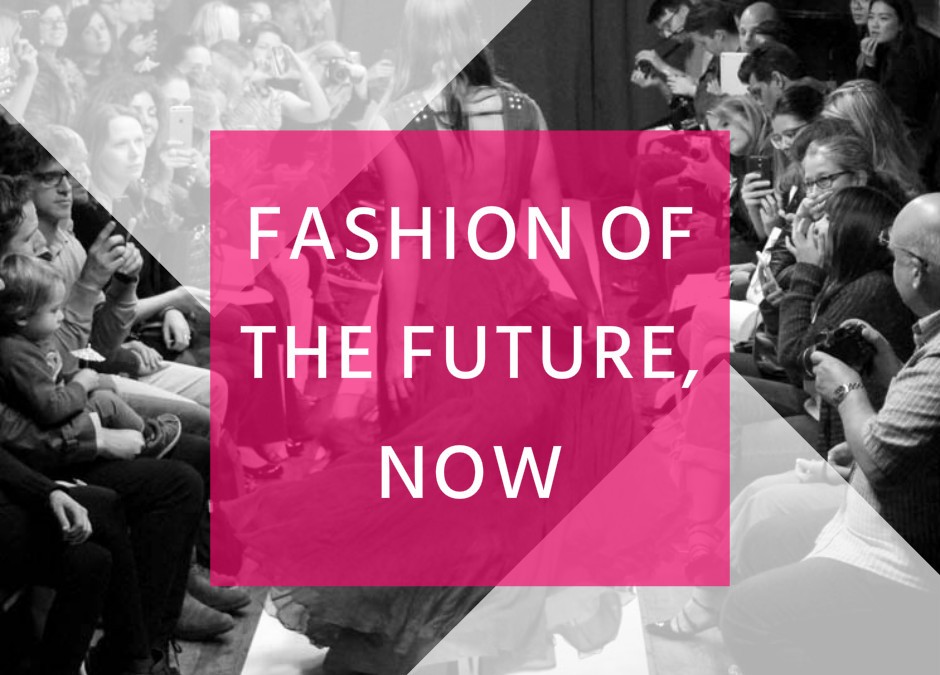 In the fashion tech universe, CuteCircuit don’t need an introduction. The design duo, consisting of Francesca Rosella and Ryan Genz are one of the pioneers in combine microelectronics and fashion design to create the fashion of the future, today. At INTERLACED 2015, Ryan Genz walked us through a decade of the studio’s work.

One of Ryan and Francesca’s first designs is The Hug Shirt, which actually predates CuteCircuit. “We had just heard about research on wearable electronics and started interviewing people and asking them what do they desire. Some of them said they missed their friends. So we thought, there’s something in that,” said Genz. “A lot of time when people miss someone, they mostly miss the physical contact. So if you can send a text or a voice message, why can’t you send a hug to somebody? And that’s how The Hug Shirt was created.” It’s a physical interface that when hugged by the wearer records the hug into his or her clothing. The embrace becomes a data message in the wearer’s phone, which they can send to anyone in the world. “If the person who receives the hug is also wearing their hug shirt, they would physically feel the hug they receive,” explained Ryan. “It’s a physical sensation from start to finish.”

After showing it at Wired Next Fest in 2006, The Hug Shirt was included in Times Best Inventions of the Year and drove 3 million people to CuteCircuit’s website who wanted to buy it within a month. Francesca and Ryan had two.

Following the success of The Hug Shirt, the duo were invited to create a design showing the future of fashion for the Museum of Science and Industry in Chicago in 2007, which saw the birth of The Galaxy Dress. It’s still the world’s largest LED wearable display, with over 24 000 LEDs inside, each one individually addressable.

The Galaxy Dress took CuteCircuit from the museum floors to the red carpet. One of the people who saw it was Katy Perry’s stylist, who ended up appointing the duo to create a dress for the singer to wear at one of the biggest fashion events of the year – The MET Gala.

When Katy Perry’s strutting her stuff with your designs, you know you’re onto something. After the MET Gala, Katy was on the cover of every magazine, and by the time Ryan and Francesca got back from New York, Selfridges were on the phone asking for their first ready to wear collection. One of the first pieces they designed and the first high street ready to wear pieces to be stoked at Selfridges was The Twirkle Shirt. The shirt reflects your body movement into its design. For example, if the wearer is calm and still, the shirt is quiet. If they’re dancing, the shirt goes crazy as well. And it’s washable!

Another showstopper from the collection is the K Dress – a short, mini version of Katy’s dress with a few less LEDs that the wearer could control. “You could set it to rainbow patterns, sparkle or just look as a normal dress,” explained Ryan.

Katy seemed to be a fan and asked the duo to create another garment for her, for the launch of her single E.T. on American Idol, which resulted in a skin-tight cat suit for the singer. “This enabled us to show that the technology works like magic. There are no bulky wires or battery packs anywhere,” said Genz.

Legendary rock band U2 joined the fan squad soon after, for which CuteCircuit created a jacket for each member. The celebrity client list kept going on, as house dance DJ Bloody Beetroots commissioned the duo to design his mask. Rebuilt from innovative fabrics with embedded LEDs and respecting the original shape, the mask counts hundreds of LEDs that flash and sparkle following the rhythm of the music.

This enabled us to show that the technology works like magic. There are no bulky wires or battery packs anywhere.

Brands soon started tapping into the duo’s attention grabbing designs. In 2012, to mark the launch of the EE’s super-fast 4G mobile network in the UK, the company commissioned CuteCircuit to create the world’s first Twitter Dress. Worn by Nicole Scherzinger, the dress includes the latest CuteCircuit Magic Fabric with MicroLEDs that create extraordinary animations and receive Tweets in real time from Nicole’s fans using the #tweetthedress hashtag while she was on the red carpet.

In 2013, the company worked with Mercedes to bring to life an exclusive Pilot Suit with the most advanced micro technology and futuristic design for the automaker’s “Sound with Power” ad.

Most recently, Ryan and Francesca joined forces with EasyJet to create a line of smart clothes for both its cabin crew and aircraft engineers.

In 2014, CuteCircuit made their debut at New York Fashion Week. ‘This was quite special to us because for the first time we put models in control of their own dresses on the runway in real time,” said Ryan, explaining that each model had a smartphone with which they could control the pattern of their dresses as they walked the runway.

Technology is just another material that you can use to advance your designs to make them better, more exciting and engaging.

“What we try to integrate in our designs is a way to bridge the gap between the secluded online life and your real life. Wearable technology looks like this,” showing the INTERLACED audience an image from their New York Fashion Week debut. “Anything that anyone puts on their body is fashion. And nobody likes things strapped on their wrists because of where they are. The real opportunity within wearable technology is fashion. It’s the perfect interface to so many things” concluded Ryan. “It’s the way that people express themselves and it’s also how you present yourself to the world. In a way, these are some of the same functions that social media and the Internet do for us today. Technology is just another material that you can use to advance your designs to make them better, more exciting and engaging.”