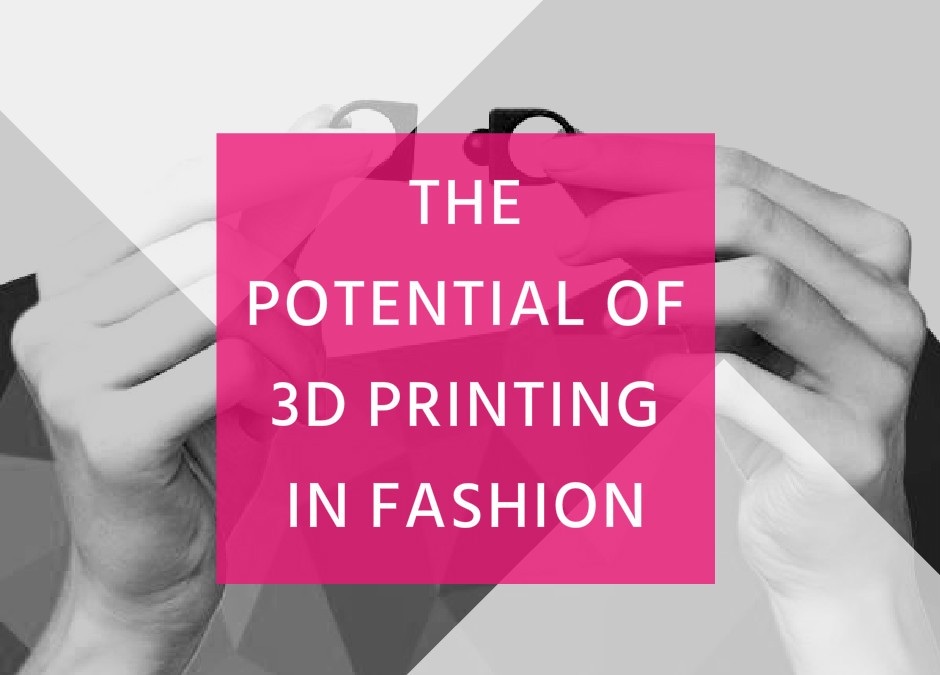 The last couple of years have been defining for the rise of 3D printing in the fashion industry. Even though not many were paying attention when designers first started experimenting with additive manufacturing, it’s safe to say that there’s now a hype around this type of technology. Especially when giants like Nike and New Balance are taking notice. At INTERLACED 2015, we discussed how 3D printing is influencing accessories and footwear and what it means for emerging designers.

Roberta Lucca, Co-Founder of WonderLuk – a curator marketplace for 3D printed jewelry – shared the reality of getting a grasp of how 3D printing technology works was different from what she expected. “The reality is very different from what the media tells you. After I got my first 3D printed it actually took me a long time to understand how to design something nice, wearable and good and figure out how the printer works. There’s a lot of things to be solved in the 3D printing world before consumers are able to buy a printer, take it home and create something beautiful”, said Lucca, explaining how this got her thinking about the best way to use such technology. “I was a little frustrated about how the fashion industry works and I thought ‘Ok, I have something that is difficult to work at the moment from a consumer perspective which could help solve a lot of problems the fashion industry faces, such as overproduction. And I thought I can start solving them by using such technology.”

Even though the process is quite computer-based, the tangible experience of the final product is just as important for the creators as for the customers. “I’m doing my best to run an online shoe business, however, as a consumer myself I know I have to go into a store and try things on,” said Bryan Oknyansky while sharing customer feedback after his first pop-up shop earlier in 2015. “I also invite people in the studio to try on the shoes. It really is a campaign to try and change the idea of value that people place in what a pair of shoes is in my case. Because if you look at a photo of a pair of 3D printing shoes online, you might think ‘Well that looks like plastic made in China’, you already have an opinion on it. So feel getting it in front of the customer is very important.”

If you look at a photo of a pair of 3D printing shoes online, you might think ‘Well that looks like plastic made in China’

One of the benefits of 3D printing is manufacturing on demand, which helps creators in a number of ways. “It taps into one of the most obvious opportunities for 3D printing – customization,” said Oknyansky, explaining how with Shoes By Bryan the customers can choose the colours of their pair, get the shoes named after them and even scan of your feet to completely adapt the shoes it them without significant cost increase. “It doesn’t matter if what you make on a 3D printer is the same or different every time because the printer is just happy to make it.”

When commenting on the changing purchasing habits and customer expectations about 3D printed products the panelists agreed that there’s still a lot to be done. “It’s still early days for 3D printing and educating consumers about the possibilities and the value of this technology is really important”, said Lucca, explaining that increasingly people want to consume things together with brands and be part of the creation process.

Oknyansky agreed: “I usually bring my 3D printer at events because I don’t think it’s good enough only to show the product. I personally believe that it’s when you actually see the machines when you start understanding what the stakes are.”

“Initially we were undecided whether we wanted to mention the 3D printing element because we weren’t sure how technology would affect our positioning as a fine jewellery brand and whether customers would perceive that to take away from the luxury element,” said Nikolay Piriankov, Co-Founder of Rare Pink – an online jeweler specializing in fine jewellery and bespoke engagement rings. However, over time, that seems to have worked in their favour. “We mentioned in sporadically in the beginning but since then we decided that it’s something that’s very much part of our existence and it’s who we are. It’s definitely something that we’ve positioned as a core of our offering.”

So, how long until 3D printing becomes standard for mainstream brands in the business and who is going to lead the movement? “I think the biggest change which is going to happen for the value of 3D printing to the consumer will come from the big companies, simply because they have the communication channel and the bigger reach,” said Oknyansky.

While this may be so, right now this technology seems to have mainly PR value for the industry leaders. “It’s going to take a lot of time for big brands to take on that. Right now it’s a novelty thing,” said Lucca. “Those brands jump on such things because they want to be seen as cool.

“As a conference organizer I’ve been trying to contact big brands that use 3D printing, such as Louis Vuitton, and from a brand perspective they just won’t talk about that,” explained our panel moderator, Faith Robinson. “That’s interesting when it comes to Nikolay’s positiong of embracing such technology in the luxury space.”

As the discussion came to an end, the panelists’ advise to anyone starting out was to learn 3D printing and the way it can help emerging creative. “If I was graduating as a fashion designer now, I would definitely learn 3D. It’s an incredible opportunity and a solid differentiation point”, concluded Lucca.