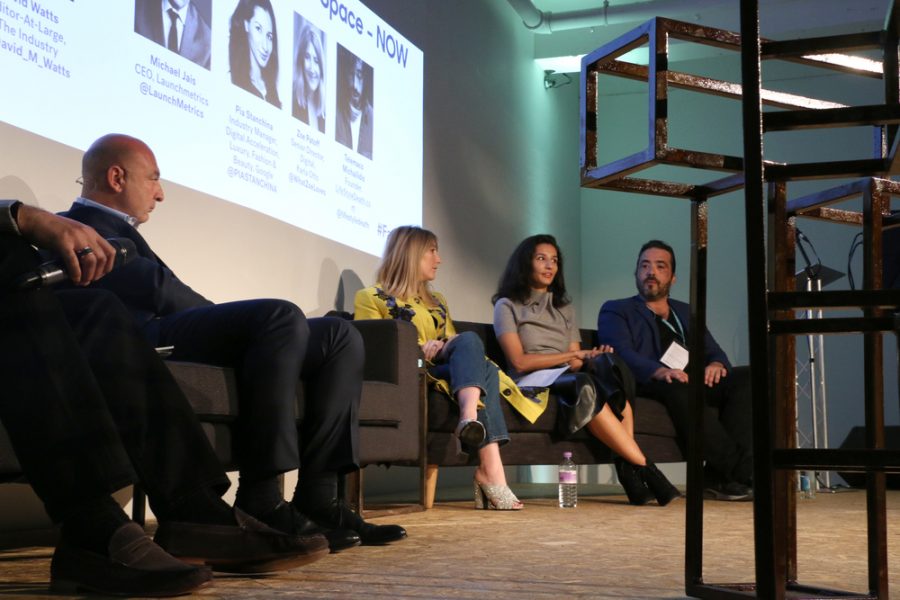 Over the course of two days last week, Studio Spaces in London gathered more than 300 leaders in fashion, retail, beauty and technology for the first FashTech London Summit. The dynamic agenda, consisting of panel debates, keynote talks and a workshop, included topics authentic to the fashion industry. From luxury retail to e-commerce and new payment options, attendees heard from speakers at the forefront of change and the innovators leading the future of commerce.

As official media partners, we bring you the key takeaways from the summit.

Discussing some of the trends within fashion for 2016 and beyond, many speakers highlighted virtual reality as one to watch. While we’re still at very early stages when it comes to VR and the technology is mainly used to drum up a brand’s PR, there’s a real possibility for virtual reality to revolutionlise the retail space. Henry Stuart, chief executive at Visualise, suggested that retailers could use such technology to create better shopping experiences. What’s more, he spoke about the idea of using VR to shop for products in virtual outlets exclusively for our virtual worlds. However, before the above comes true we need to make the headsets look good and fit enough for people to wear them outside their homes. “You shouldn’t be embarrassed to wear VR headsets in public”, said Stuart. The same goes for AR (augmented reality) – “Because of the speedy rise and fall of Google Glass, augmented reality is famously unfashionable but it’s one of the technologies that will come back in a big way”.

Look up to smart fabrics

At INTERLACED, we have never been that excited about wearables, as in fitness trackers, smartwatches or anything you are forced to strap to your body in order for it to work. Rather, we see the future of fashion in essential items we need daily, such as smart fabrics and connected garments. At FashTech this belief echoed in many of the speakers too. Debera Johnson, executive director of Pratt Institute and Brooklyn’s Fashion and Design Accelerator spoke about the future of clothing and textiles, which will rely on embedding technology seamlessly into garments and even growing materials out of bacteria. “In 10 years, 10% of our clothing will be connected to the cloud”, she said. In another panel discussion, Stefanie Cherlet, wholesale manager of VINAYA said: “A lot of people still associate wearable tech with fitness trackers, which is not something girls will wear all the time”.

Educating the industry and consumers

Over the last few years there has been a lot of discussion around fashion’s fail (especially in the luxury space) to embrace digital, new ideas and fresh thinking. Our industry, usually associated with the new, wasn’t interested in changing. Until a few months ago, when Burberry’s groundbreaking announcement in February to reinvent the fashion calendar in its own way hit the press. Since then, some followed suit, some are still resisting and we have seen creative directors of well-known fashion houses stepping down almost every week. To sum up: The fashion industry is in state of panic. This was felt over in many of the panels at FashTech too. In a session discussing the future of luxury retailing in the digital era Michael Jais, CEO of Launchmetrics said: “[Luxury] Brands used to think the Internet is just a fad and waited for it to go away. And they’re late to the party. They’re only now thinking about how to set up their e-commerce stores and but not how to drive traffic to them.”

Beyond e-commerce for luxury retailers, huge reason for the panic state of the industry in general is the lack of education and the existing knowledge and skills gap. “There is a huge disconnect between fashion peeps and technologists and, of course, that is a problem”, said Karla Otto’s senior digital director Zoe Patoff. “We need to create a new skill set for people who are entering the industry”, suggested Telemaco Michailidis, founder of LifeStyleDeath.com.

The consumer also needs to be educated about what fashion tech actually means. But before that, design and industry bodies need to play a bigger part in bridging the gap between the two.

The importance of fashiontech clusters in London

It’s not all so grim though, as a very exciting announcement came just on time to bring our hopes up about a brighter fashion future. Rohan Silva, co-founder of coworking space Second Home revealed that his enterprise is partnering with the Royal College of Art to create a dedicated fashiontech hub in west London. The plan is to bring together a crossbreed of industries, ranging from fashion brands to e-commerce players. Silva described the new space, which is set to open in autumn 2017, as “FashTech every single day of the week”. Without a doubt, an exciting time to reconfirm London’s leading position as the fashiontech capital of the world.