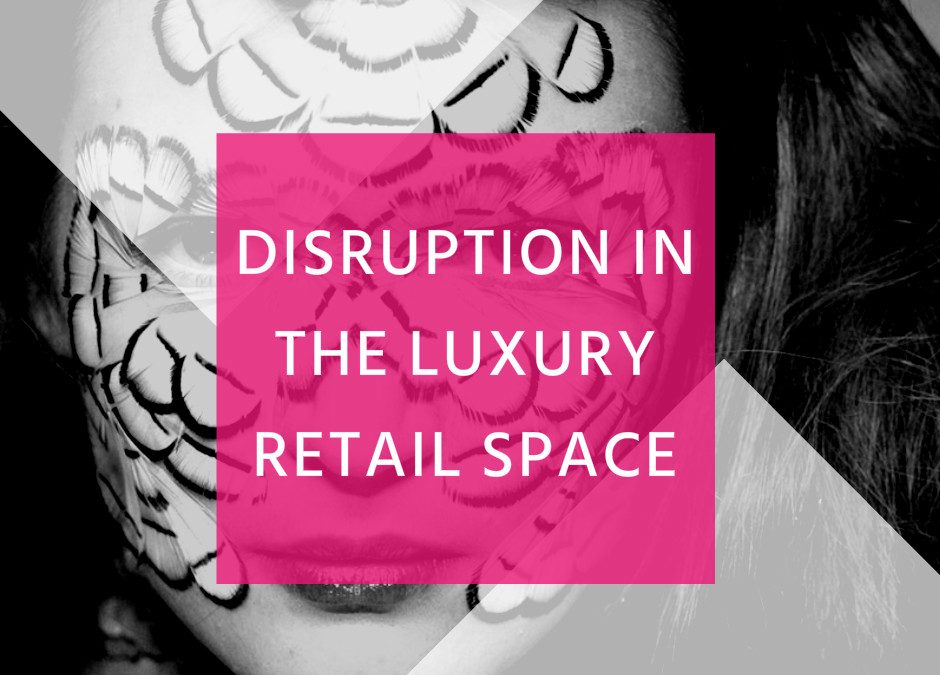 While in recent years the pairing of the terms fashion and technology has been making waves and we’ve started to see more brands and retailers catching up on the movement, it seems that luxury has been one are in fashion which has consistently refused to warm up to tech. It was only in 2015 that the powerhouse Chanel embraced ecommerce while the likes of ASOS and Net-A-Porter had already established themselves as leaders in the online retail space.

At INTERLACED 2015, we invited technology and retail expert Jonathan Chippindale, CEO of Holition to talk about disruption in retail in the luxury space.

Looking at the broader picture first, Jonathan highlighted the power of technology companies and entrepreneurs to solve global issues, even more successfully than governments today. “The solutions of the really big issues facing us today are things that would have been done by governments ten years ago but are now done by technologists. Technology can has this incredible power of punching through barriers of geography, time, race, colour, gender, in bringing the world together in a way that our fathers and grandfathers would never imagine possible.”

The effect of digital in every aspect of our lives is undisputed, but while some industries embrace it, luxury has been consistently refusing to experiment with tech. In his talk, Jonathan explained how rather than fearing technology, luxury clients can use it to their advantage.

Today brands need to constantly engage in conversations and on-going communication with consumers. This is particularly true for premium retail brands and can be used powerfully to influence consumer choice.

Burberry is filming the fashion show exactly as everyone else in the audience. They’re just another member of the audience, pushing out content to their network, like everybody else. They don’t own that fashion show. It’s far more democratic and technology has made that happen.

To illustrate this, Jonathan referred to Steve Jobs’ the idea of Infinite Loop. The Infinite Loop is the connection between a brand and a consumer so powerful that the consumer would immediately buy the next product that the brand brings out without looking at any other competitor. If we think about the Infinite Loop from a content point of view, it s a connection between a brand and consumer where the brand pushes out content, the consumer grabs it, repurposes it and brings it back to the brand just so that it can start all over again.

An example of this in the luxury space came from Burberry, which filmed their entire catwalk show at London Fashion Week 2013 using iPhone 5s. “Burberry is filming the fashion show exactly as everyone else in the audience. They are admitting that the front row has been taken by the bloggers and they’re just another member of the audience, pushing out content to their network, like everybody else. They don’t own that fashion show. It’s far more democratic and technology has made that happen.”

DON’T DO IT ONLY BECAUSE YOU CAN

“Technology has to be genuinely and obviously useful in a retail space, otherwise it becomes a gimmick,” warned Jonathan. “Tring to get someone to play around with technology in a retail space is a very big ask. People don’t want to feel like idiots in front of their fellow co-shoppers.” British retailer M&S, for example, have introduced pads and screens in-stores to little uptake from customers. “If no one ever uses is because they don’t know what the benefit of using it is, then what is the point of that piece of technology?”

So you have decided to use technology to enhance the customer experience. Now what? “Technology has to work and it also has to look great,” said Chippindale. “There are far too many ideas that don’t make people look beautiful and don’t do justice to a situation where a consumer in a retail space is trying on clothing. In my view that damages brands, it erodes equity and doesn’t add benefit.”

Holition has worked on such challenge with Japanese retailer Uniqlo for their magic mirror project. The smart mirror allows customers to wear any item of Uniqlo clothing, recognizes what they’re wearing and allows them to change it into the colours of those items.

In the same line of thinking, Holition worked on with cosmetic giant L’Oreal for their Makeup Genius mobile app. “There are a lot of similar applications around now, but again, we were really focusing on making it beautiful, making the makeup look real and the technology working,” said Jonathan.

Going back to the M&S example, and they are by no means the only ones, when integrating technology in-store, most retailers place their bet on tablets, pads, and screens that require the customer to look down. Jonathan warned against that, especially in the luxury retail space. “Why would Louis Vuitton spend hundreds of thousands of pounds building an incredible vitrine and window display full of products and then get you looking down at a screen? We need to find technology that allows people to look up, enjoy the space and get information to consumers without screens.”

One example from Holition in this line of thinking is a data visualisation installation the company did for Lyst’s 5th year birthday party. To show Lyst’s scale Holition spoke to the company’s developers and found they’re handling 30 000 interrogations every second which was a powerful insight. “We worked with hat and created a real-time projection which grabbed the data as it comes into Lyst, pushes it through the projection and updates the Lyst website. What Lyst realized then was that they have a trend tool. With this project technology was able to refocus their thinking around what their business model was going to be.”

“We do one fashion show every year. A few years ago we worked on a holographic show for Dunhill in Shanghai where we had two holograms to enhance the catwalk.” The film on YouTube generated 2m hits in the first 10 days. Again it’s a really beautiful way to communicate fashion. At the end of the show, the models stayed on stage people walked up the stair and walked around the models so that they could engage and interact, so technology wasn’t a barrier between the people and the fashion, it was an enabler to encourage people on stage.

Why would Louis Vuitton spend hundreds of thousands of pounds building an incredible vitrine and window display full of products and then get you looking down at a screen? We need to find technology that allows people to look up, enjoy the space and get information to consumers without screens.

Another example is the work Holition did for the Alexander McQueen Savage Beauty exhibition in collaboration with the London College of Fashion. Warpaint, as the project is called, was an installation, which allowed people to virtually try some of the iconic McQueen looks.

Lastly, Jonathan touched upon the difference fashion brands can make by utilizing technology in the right way with two examples of fashiontech projects from Holition.

Holition was commissioned by a French luxury brand to create a range of clothing that changes colour according to the pollution level of the air around the wearer. Each of the dresses connects to the person’s phone, takes a reading of the pollution level and sends it to the brand every three hours. Creating 40 of these pieces that people wear in Paris has enabled this brand to map out the air quality throughout the city.

“There’s an opportunity for wearables to be used to talk about society, humanity and the world we live in. Last year, there was smog alert in June in Paris and when a French minister was asked how bad the level of smog was, he couldn’t answer. This brand was able to put its hand up and say ‘We know more about what’s going on in the city than you do, even if we’re just a brand for handbags and heels. ‘

There’s an opportunity for wearables to be used to talk about society, humanity and the world we live in.

Last year Holition collaborated with THE UNSEEN for an intelligent, sensitive clothing that talks about state of mind and well-being. “We created a cape that scans your brain, understands your mood and emotion and changes colour according to that. This is now being taken up by health trust because they’re interested in seeing if this technology can be repurposed,” shared Jonathan.